What is Field Archery? 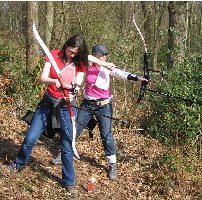 One of the great attractions in archery is the diversity of shooting styles, the seemingly endless variations of equipment and of course the great variety in courses and targets that can be shot. In all of these variations there is one single intent and that is to hit the specific point on the target that you are aiming at. Like any sport unless the objective of the sport can be achieved with some regularity its not much fun. As with any other sporting pursuit practice is the way to improvement.

Whilst one of the common objective of archery is to hit what you are aiming at, there are far easier ways of hitting something at which you aim which is why archers enjoy doing it the hard way, using their own strength and co-ordination to achieve a successful hit. To this end the sport allows a wide variety of equipment that can be used to help hit the target. Sights, stabilisers and bows that provide a mechanical advantage are all catered for within the laws of the sport, providing various divisions to ensure fair competition.

So what’s different about Field Archery? The ideal Field Archery course will be set in rough terrain and forestry areas with steep slopes and as variations in ground as can be achieved safely.

A typical shot on a "Field" round set at 50yds

Whilst there are various rounds that are shot by Target Archers they will typically shoot greater numbers of arrows from fewer fixed distances. The process of shooting is tightly controlled by a Field Captain who will ensure that the arrows are shot within a specified amount of time and that all the archers collect their arrows and record their scores together. Archers are allowed to sit and rest between shooting, some will have special tents in which they can shelter from the weather. Target archery demands very high levels of concentration, with the archers needing to be fit physically and mentally to achieve success.

Field archery, meanwhile, means a day of shooting in the rough and necessitates walking from one target to the next. The distances walked will be determined by the available space and the course setters ability to set out 14 or 28 targets in safety. The sort of round and distances shot can vary widely.

A Hunter and Field round comprise 28 targets each, with four arrows being shot at each target. These rounds are shot from marked distances varying from 20ft up to a maximum distance of 80yards. Most of the targets require the archer to move forward to the next distance between each arrow. Other rounds will include shooting at monochrome or coloured pictures of animals, these can be either from marked or unmarked distances.

In some rounds all the arrows that hit the target will score, whilst in others the first arrow that hits from a total of three arrows will score depending which arrow or which zone on the picture is hit. In some cases the shots will be made more difficult by clever use of the intervening ground or the positioning of the peg from which you have to shoot forcing the archer to not only estimate the distance but allow for the slope of the ground or perhaps the incline of a tree which can influence the bow alignment especially for those that choose to shoot without sights. Other factors which can influence the shot will include the lighting conditions, in woods this may mean from shooting from the dark to the light or the other way round both contributing to the difficulty of the shot.

This wide variety of terrain, shooting conditions and rounds are the true attraction of field archery, it is without doubt more physical than target archery, but it still demands high levels of concentration but with a wider spectrum of skills.

Archers who have not had the pleasure of shooting a Field Archery competition often think of it as standing at a stake in an open field and shooting at a target yonder. Not so! A field range is a challenging course. The targets are generally placed outdoors in varying terrain, from bushveld to grass areas; uphill, down hill and at different distances from target to target.

Field Archery is where CHAMPIONS learn how to shoot. It is a proven fact that a proficient field archer is also a proficient 3-D and indoor archer.

There are a few basic differences between Field Archery and most 3-D courses. Most notably, that field courses have marked distances. Field archery is a game of precision shooting - not yardage estimation. 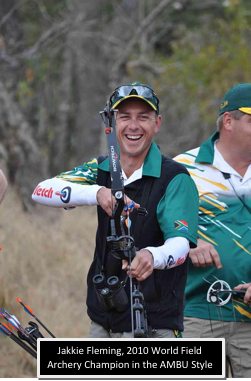 Field Archery in South Africa is based on the IFAA rules and regulations and the range is made up of 28 targets. There can be 28 targets one after the other, or you can have a 14 target course that is shot twice. We prefer a 28 target course.

The distances vary according to the round you are shooting. The standard IFAA field round has distances that vary from 20 feet to 240 feet (80 Yards). There are four different size faces, the further the target, the bigger the target. The idea is that it teaches you to aim at a spot and will make a better all around archer out of you. Now the younger folks get a break. If you're under 17, your longest distance is 50 yards; if you're under 13 the longest range is 30 yards. Targets are round, black and white faces. There is a possible 20 points per target and a perfect round is 560.

The animal round is shot once a year at the Field Nationals. The animal round is much like the 3-D round but the targets are 2-D, that is, an animal printed on a sheet of paper that is usually glued on a cardboard. Once again, distances are marked to give everyone an equal chance.

We use the double scoring format. You will receive 2 scorecards on registration of a tournament. When the target draw is announced at the beginning of a tournament, the first person in the group is normally the Captain of the group, the second and third person is the scorekeepers and the fourth person assist with the pulling of arrows. A Cub master will be appointed to accompany the cubs on the range and assist with the scoring. After completion of a competing day you need to verify your scores and sign the score card before it is handed in for score capturing.

Provincial and National qualifying scores can only be obtained on a field and hunter round. The animal round score at the annual SANFAC does not count towards your qualifying scores. A National record can be shot on each of the competing days including the animal round. There is also a 2 day record and a 3 day record up for grabs. IFAA World Field Records can only be shot at the WFAC and ARFAC tournaments.

IFAA. Round Targets:
There are two IFAA target rounds, the “Hunter” and the “Field” round. The Hunter round is a black target face with a white “bulls eye” area and the Field round is a black “bull” area with a white second ring and then a black outer ring area. Both rounds consist of 28 targets made up of 4 different size target faces. The archer shoots 4 arrows at each target with a possible score of 5, 4 or 3 for each arrow. Total possible score for a 28 target round is 560. Both target rounds are “marked distances”, so the distances are set and displayed on the shooting pegs. 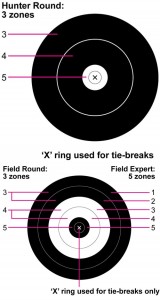 IFAA. Animal Round:
The IFAA Animal round is made up of 28 targets consisting of 4 animal groups ranging from small animals eg. rabbits to very large targets such as the American moose. The Animal round can be shot at both known and unknown distances. Each target has 2 score areas being the “kill” and “wound” zones. The round is basically a 3 arrow round.
The scoring system is that if required the archer can shoot three times to obtain a score.

As a round consists of 28 targets and each is worth a possible 20 points, the total round possible is 560 points.

Comments on this page are locked.